Starfy Wiki
Register
Don't have an account?
Sign In
Advertisement
in: Characters, Royalty, The Legendary Starfy Characters,
and 3 more

Bunston (ランパ, Rampa) is a character introduced in the game The Legendary Starfy (known as Densetsu no Starfy Taiketsu! Daiiru Kaizokudan in Japan). He is a blue bunny-like creature wearing a red spacesuit with a green helmet, orange jet pack, red eyes and is a prince like Starfy. He first meets Starfy after having fallen through his roof from Planet Bunnera, his homeland, which was attacked by the Space Pirate Mashtooth. He also asks Starfy to find the missing pieces of ship. Bunston is 10 years old.

Although in game Bunston cannot be controlled alone, in certain rooms in the game he appears with a thought bubble above his head. Inside the thought bubble is a small image of a dragon (called "Monstar"), seal (called "Starpedo"), ghost (called "Starfright"), or rooster (called "Roostar"). If Starfy touches this thought bubble, he morphs with Bunston to gain the ability pictured. These abilities are all unique: Monstar's ability allows Starfy to breathe fire (Spicy Belly); Starpedo's ability freezes, then breaks gooey-ice in arctic regions using a giant icicle (Icy Spike), making them passable; Roostar's ability provides Starfy to be able to make loud Bugawks that can also be used to use Liftwisps and make Stanglers and Lurchins not damaging anymore, making them as temporary platforms, and lay chicken eggs (Bugawk); Starfright's ability lets Starfy drop "will-o-wisp"s (ghostly fires) around foes, make him disappear for a while, and make him float around (Vanish).

In the last Secret levels of certain Worlds, there will be extra Gems for the forms, making them more powerful. Then, that ability will be later used in that level for an example. 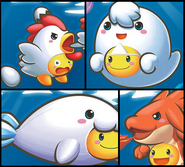 Bunston on the DS's touch screen.

Bunston is old artwork in the Japanese website of TOSE for The Legendary Starfy.

Bunston in a Japanese commercial.
Community content is available under CC-BY-SA unless otherwise noted.
Advertisement