Starfy Wiki
Register
Don't have an account?
Sign In
Advertisement
in: Japan only, Article stubs, Densetsu no Stafy 2 Bosses,
and 9 more

The Puchi Ogura (literally Petite Ogura) are Axolotl-like creatures and Ogura's children. There are 10 of them. Appearing in Densetsu no Stafy 2 as the secondary antagonists. They were either bosses, helped bosses, have there own allies, but some do not. Or just stayed with one. Their names in game were just Puchi Oguras #1, 2, 3, 4, 5, 6, 7, 8, 9, and 10. They also appeared in flashbacks in Densetsu no Stafy 3. They seem to have died after they were defeated by Starfy, but it is still unknown if they did or not. As Moe has a flashback of the deceased characters throughout the game (including Ogura, Kyorozo, and his mother), the Puchi Ogura can be seen as well. It is unknown if this is just an added detail for Ogura, or if they might have died since Ogura did.

This one has a purple tail, blonde hair, and she wears a black cowboy hat. She is seen with Konk.

This one has a red tail and wears a biking helmet, black visor, and blue fins. He teams up with Pekin Duck Model.

This one has a yellow tail, but a lot of his body is also green. Part of his head is yellow. He teams up with Kiremoth.

This one has a reddish orange and blue tail, reddish orange hair, and appears to be wearing glasses with his left pupil missing or obscured. He can turn into a Dragon Monster and battles by himself.

Only this one's tail can't be seen. She has pink hair and wears a pink dress. She teams up with Numan.

This one has a black tail with two yellow dots on his chest, blue hair and three yellow fins. He uses the Kigurumi to battle.

This one has a yellow tail, three green thorn-like fins, yellow helmet and there appears to be a picture of a skull on his black underside. He rides Mandazetto.

This one is mostly black, long tail, black hat resembles a wizard, two yellow thorn-like fins and he has a pacifier. He teams up with Yurikarugo.

This is mostly yellow, blue curve fins, and a single antenna and appears to be crying most of the time. He is seen with Jiiyan.

This one has a blue tail, an eye patch, and a bandana that covers most of his face. He uses a big helmet to battle and can create clones. 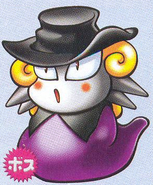 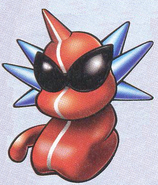 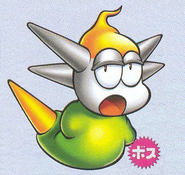 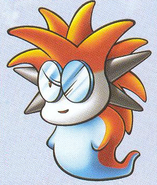 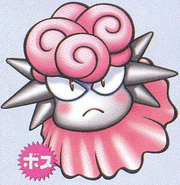 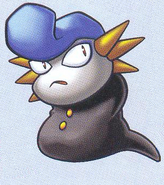 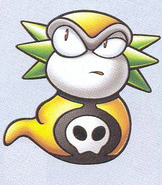 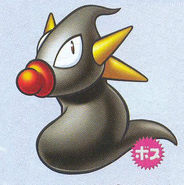 This article is a stub. You can help Starfy Wiki by expanding it.

Community content is available under CC-BY-SA unless otherwise noted.
Advertisement