Edit
watch 01:36
We're Getting Mutants in the MCU - The Loop
Do you like this video?
Play Sound

Shurikit, (Known in Japan as Nyanja) is a ninja cat who appears in The Legendary Starfy. She has a rival called Kittana, though she doesn't take their rivalry as serious as Kittana does.

In the games, she teaches Starfy and Starly ninja abilities such as Wall Jump and Double Jump. The fights are usually like a game of hide and seek. They hide, Starfy has to find them following certain clues and attack them.

In The Legendary Starfy, she first appears in Sogwood Forest, being attacked by Grippits. Once Starfy saves her, she declares him her master, and dedicates herself to training more. Later on, once the The Terrible Trio catches up with Starfy, Moe, and Bunston, Shurikit attacks Snips and Ronk and leads them into Glitzem Grotto. There, she gets trapped in a cage, and asks Starfy to help her. She teaches him a new ability, the Air Jump, in order to help her. Shurikit calls Starfy "Master" because of how he saved her. Moe often jokes around about this. 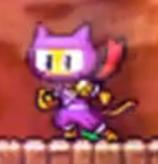 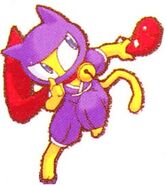 Shurikit from Densetsu no Starfy 4.
Community content is available under CC-BY-SA unless otherwise noted.
Advertisement